Skype Telegram WhatsApp
Contact us to get PokerKing rakeback deal 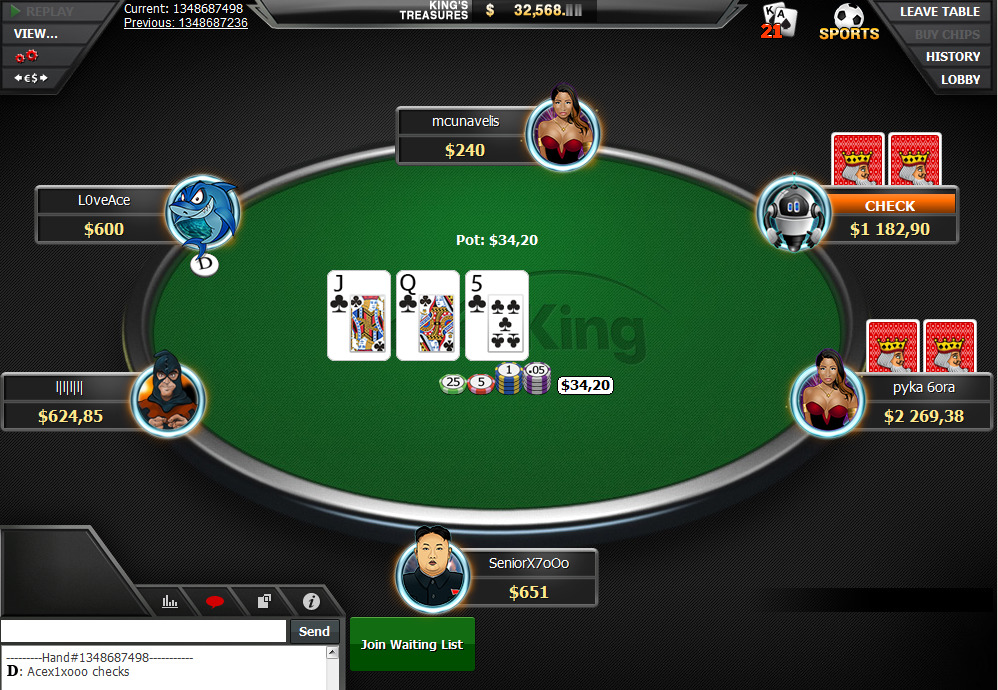 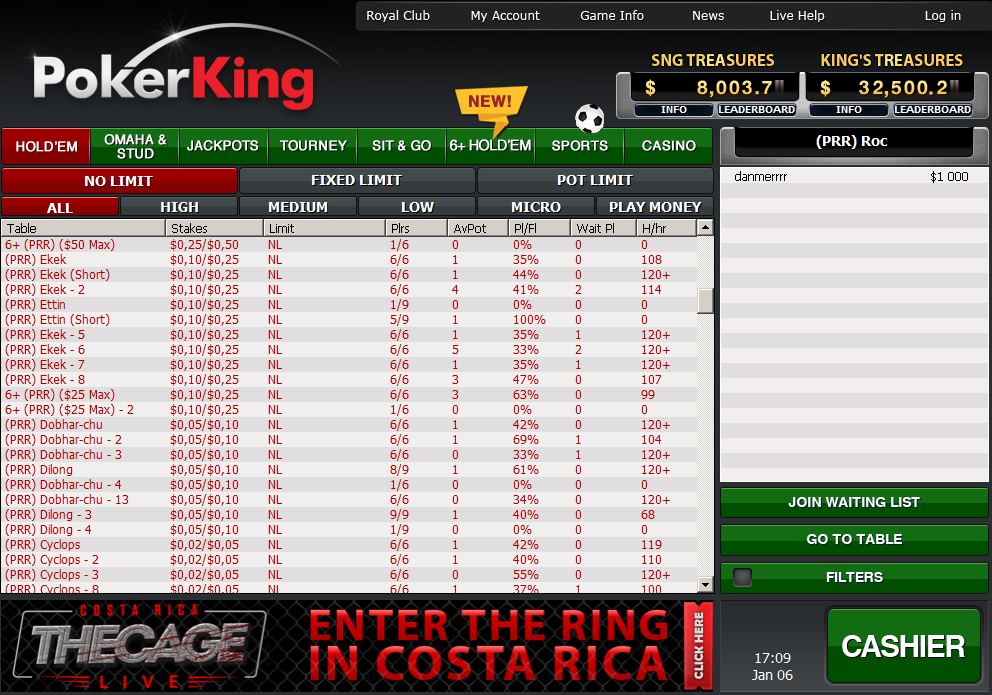 PokerKing is the largest American poker room on the WPN. In addition to American players, there are many Hispanics, Australians and Middle Easterners on this network, which forms a rather weak field. Poker King is the only WPN room that accepts players from Europe. Although the room itself does not appeal to Americans, they play PokerKing through other rooms. Therefore, American law is not violated.

PokerKing software was developed by IGSoft. The random number generator has received the certificate of conformity from iTechLab. The client underwent significant updates in 2019 – the engine was changed, as a result of which the software became more flexible. Now you can download PokerKing to any platform.

After launching the client, you will see the main lobby with a list of cash tables for No-Limit Hold’em. Navigation keys are located between the tables and the room logo. They are represented by three stripes.

The top strip displays the main poker formats – Hold’em, Omaha, Blitz Poker, etc. The middle strip is reserved for formatting cash tables according to the method of betting – no-limit, pot-limit, etc. Tournaments are also configured here. In the lower horizontal bar, the games are divided into groups, taking into account the size of the bets and buy-ins.

After registering with PokerKing, you can view the poker players sitting at the table right from the lobby. To do this, simply select the desired table, and a list of participants and the size of the stack of each of them will appear on the right. There are also buttons for adding to the waiting list, opening a table, settings, cashier and player profile.

In terms of their appearance and functionality, PokerKing tables do not differ much from popular poker rooms. However, they have one feature – you can change the ratio of the width and height of the tables, which will be useful for owners of monitors with a non-standard diameter. It is possible to deeply customise the appearance of tables. To do this, click on the gear icon at the top of the table and click on the Themes tab.

The considered poker room with players from the United States offers a large selection of cash games and tournaments in a wide range of limits. Due to the fact that most of the visitors live in America, the peak attendance occurs in late night and early morning European time. However, even in the evening, you can find a lot of tables and tournaments – there will be only 15-20% fewer of them than at the peak of traffic.

Most of the game is observed in the cash at 6-max tables with limits of $ NL25 and $ 50 – an average of 10 tables per limit. As the stakes increase, the number of tables decreases. But even at the maximum limits, NL3K-5K 2-3 tables can be found. Full NLH 9-max tables are less popular – at each limit there are no more than 2-3 tables. Omaha is popular at PokerKing, and is practically on par with Hold’em in terms of the number of players.

Classic SNGs are represented by buy-ins ranging from $ 1.55 to $ 40, including the turbo format.

MTT at Poker King is represented by a wide selection of events. Tournaments with prices ranging from $ 1.1 to $ 1.050 are regularly held. 10 multi-table tournaments of the Big 10 series are organised daily, the guarantee of which ranges from $ 100 to $ 25.000. There are also ten more tournaments, but in a fast format, the guarantees in which are slightly lower – from $ 300 to $ 2.000.

The largest series of tournaments is held several times a year and collects a prize fund of about $ 10 million. So, at the end of last year, 6.740.000 dollars were played out in The Venom series.

Profitable Poker King bonuses allow you to get a significant advantage from the very start of the game. New users can qualify for a 100% first deposit bonus if its size ranges from $ 25 to $ 1.000. If you transfer money in cryptocurrency to your account, the bonus will increase to 200%.

You have 2 months to use the bonus. During this time, you need to collect 27.5 status points for each bonus dollar. Points are awarded as follows – 5.5 points for every dollar of generated rake. Thus, the first deposit bonus adds 20% to the rakeback.

There are five permanent bonuses in the PokerKing poker room:

The rake collection system at PokerKing is quite standard – 1 cent is taken from a 20-cent bank. Thus, the rake is 5%. It is noteworthy that in Poker King the maximum cap is limited to only $ 3 at any limits. If there are not enough participants at the table, the cap may be even smaller.

The modern PokerKing rakeback system resembles the PokerStars reward program used until 2016. For every dollar of rake generated, you will receive 5.5 status points.

The loyalty program is divided into six levels, four of which are monthly, and the top two are annual. The higher the level, the faster Royalty Points are accumulated – these points can be exchanged for money. So, at the silver level, which requires 750 points, you can get rakeback in the range from 12% to 14.5%. And at the very last level of the loyalty system, which is awarded for earning 1 million status points, you will receive 57%-65% rakeback.

To maintain the achieved level, during the next reference period, it is enough to score twice as few points as is required to obtain this level. In addition, there is 1 month more time for this.

To exchange SP points, go to the “Rewards” section, select “Loyalty” and click on “Achievements”. When you collect the required number of status points, a certain bonus will be available. To get it, click on “Click Here”. The rate of these points is always constant, so it makes no sense to accumulate them.

To exchange RP points, you need to follow the same steps as for SP points. But you shouldn’t rush to exchange these points for cash, because their rate depends on the current level. Therefore, wait until you reach the highest possible level of the loyalty system, and exchange RP points at the most favourable rate.

Additional PokerKing rakeback can be obtained by participating in rake races. The leaderboard prize fund forms the collected rake, i.e. additional fees will not be deducted from players. For every 6 cents of rake, 2 cents goes to the formation of The Beast fund. Points are awarded in proportion to the amount of the contribution to the bank. There are restrictions on the deductions of money to the prize pool of The Beast – the cap varies from 4 to 24 cents depending on the number of players.

To get even more rakeback at The Beast, contact our managers for an individual deal.

You can make deposits at PokerKing in almost all popular ways – bank cards, cryptocurrency (bitcoins), through Skrill, Neteller, ecoPayz systems. The minimum deposit amount for all methods, except for bank cards, is $ 5. The minimum withdrawal is $ 5 – $ 10. When using electronic systems, please note that the e-mail of your account in The Beast must match the e-mail of your wallet.

To deposit your account, click on the “Deposit” button in the main lobby of the room. Choose a suitable system and click on “Deposit with”. In the window that appears, fill in the information about your payment system and save it. Specify the deposit amount and click on the “Next” button, after which you will be redirected to the payment site to confirm the transaction. The funds will be credited to the account instantly.

No commission is charged for the first cash-out up to $ 2.500. For all subsequent withdrawals, the system retains 5%. Money is received within three days from the date of creation of the withdrawal request.

Why is it profitable to play at PokerKing

The main advantages of the PokerKing room: