Skype Telegram WhatsApp
Contact us to get PokerBros rakeback deal 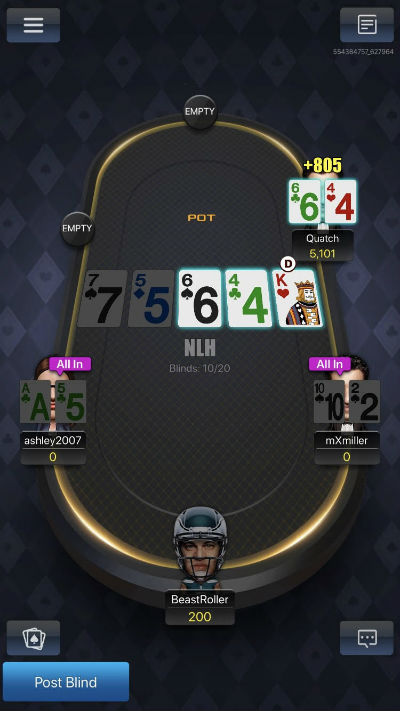 PokerBros is a mobile poker application that appeared in 2019 and has become a strong competitor to such rooms as PPPoker and Upoker. A distinctive feature of PokerBros is the original graphic design and huge functionality. The number of visitors to this poker room is constantly increasing, mainly due to weak players from the Americas. As in similar applications, in PokerBros the game is played for play chips, which are exchanged for real money in accordance with the rate set by the club. To join the game in the application, you must apply to join the PokerBros club. When you fund your account, your money will be converted into the conditional currency on the poker room account. Cash-out is made at the agreed rate to a convenient payment system after making a request. From this PokerBros review, you will learn about the possibilities of the poker room software, the variety of games and limits, the available bonuses, the amount of rake and rakeback, as well as the methods of making deposits and withdrawals.

The poker room PokerBros was created exclusively for users of mobile devices. The application was developed by KR Entertainment Limited. By its principle of operation, the PokerBros software is similar to other applications, however, it has better graphics and allows more detailed settings.

The main lobby of the room has a vertical orientation, in the middle there are labels with clubs in which the user is registered. Going to a specific club, you will see a list of tables of two levels, which can be sorted using special filters. Also, the settings allow you to leave only those tables that correspond to the specified parameters.

The image of each table contains data on the type of poker, the limit played, the number of players and the time during which this table will be active. Active tables are indicated by a yellow arrow-shaped graphic element.

To access the theme settings, click on the menu icon (three bars) in the upper right corner of the lobby. Select Theme Setting and you can customise the graphics and interface with a variety of options. In terms of variety and flexibility of settings, PokerBros surpasses all competitors.

For each type of poker, you can choose the appropriate table theme by choosing the appropriate cloth colour, the type of button chip, the image of cards and their backs. To quickly mark opponents, you can use one of seven available colours, each of which corresponds to a specific type of player.

The PokerBros mobile application allows you to play simultaneously at a maximum of three tables. To be able to open even more tables, you need to download PokerBros on your PC and use special emulators or virtual machines. The application supports programs for collecting statistics.

In terms of traffic and number of clubs, PokerBros is still inferior to competitors with a richer history. Poker players from the USA and Latin America play here mostly, which explains peak traffic times. Most of the game is observed at night and morning European time.

Considering that the clubs to which we add our players are included in large alliances, there is a sufficient number of games in them at any time of the day. At the limits NL10 – NL1K there are the most players, sometimes the most expensive tables appear – NL2K-5K. At similar limits, there is a game with the rules of pot-limit Omaha. Up to ten multi-table tournaments with guaranteed prize pools take place every day. Open Chinese poker is represented by limits with jackpots up to $ 20. You can also play Short Deck Hold’em at PokerBros.

Many PokerBros clubs play the Bad Beat Jackpot. This jackpot is progressive, i.e. its size is constantly increasing. The current prize money can be seen at the top of the lobby. For the jackpot to be played, several conditions must be met:

Depending on the limit at which the jackpot is triggered, the percentage of the prize money will differ. From 15% to 85% of the prize fund can be awarded.

The rake at PokerBros is the standard 5% for all games. However, the cap size for different limits may differ. So, at limits up to NL200, the rake is limited to 3BB, and at higher limits it becomes less – 2BB. In open Chinese poker, the rake is less than in Hold’em and Omaha – it is only 3%.

The rake is distributed among the players according to the most widespread and fair system – Weighted Contributed. This means that the player will be credited with a percentage of the total rake corresponding to the share of his contribution to the pot. If the hand does not reach the flop, then the commission is not charged. The rake may vary slightly in different clubs.

The rakeback amount also depends on the club you are playing at. To get the most favourable conditions for rakeback, contact our managers.

All transactions at PokerBros are decentralised. The game is played on Play-money. To buy it, you must make a deposit using the services of intermediary agents. Real money is exchanged for play-money at the rate set by the club. At a similar rate, a reverse conversion occurs when funds are withdrawn. Cash-outs are also made by our agents.

All deposits at PokerBros are commission-free. The minimum deposit depends on the club, but is usually at least $ 300. When you cash out, a certain commission is charged, which also depends on a particular club. Financial transactions can be made using Skrill, Bitcoin and cryptocurrency wallets. To register in the club and make a deposit, contact our managers.

Why is it profitable to play at PokerBros

If you read reviews about PokerBros on the Internet, you can highlight several main advantages of this poker application:

Undoubtedly, PokerBros also has disadvantages that are common to all similar applications – you cannot perform financial transactions on your own, peak times are inconvenient for Russian players, and there is a commission for cash-outs. However, a weak field and good rakeback completely eliminate these disadvantages.