Skype Telegram WhatsApp
Contact us to get bwin.Party rakeback deal

Bwin.Party is a large poker network formed by the merger of two well-known gambling companies (PartyPoker and Bwin). If PartyPoker was at one time the most visited poker room in the world, then Bwin is one of the world leaders among bookmakers. The merger of the companies took place in 2011, and as a result Bwin.Party became the largest provider of gambling services. Party Poker left the American market in 2006, and since then the room traffic has been gradually decreasing. This is due not only to the exclusion of American players from the pool, but also to the not very competent policy of the management - the service of the poker room was getting worse. The Bwin poker room was also going through hard times. At that time, the room was part of the Ongame chain, which was not very popular. As a result of the merger, the business of both brands got better. Party again became attractive to customers, and Bwin became the head of the network. Today Bwin.Party is one of the most popular and profitable poker networks, which is popular with both amateur players and regulars.

Let’s start our Bwin.Party review with its software. The network uses Party Poker software. The new chain decided to change only the colour scheme, name and logos, everything else remained unchanged.

The design of the client of the poker rooms of the Bwin.Party network is quite modern and stylish, it is dominated by dark shades. The design of the lobby and tables is done in such a way that the player’s eyes do not get tired or strained even during long sessions. Using the system of filters and tabs from the main lobby, you can easily find the games you need, sorting them according to certain parameters. The poker format, discipline, limit, currency, number of players and other parameters are configured.

When developing the software, the preferences of the target audience – recreational players – were taken into account. Therefore, there are no waiting lists in the usual form, you can only get into the general queue. From the lobby it is impossible to see the composition of the players at the table, and many tables have become anonymous. In the rooms of the network, functions such as adding players as friends, exchanging private messages, completing missions, and many others are implemented.

The poker application tools allow you to customise the tables according to the personal preferences of each player. For example, you can set a favourite place where you will appear at any table. You can also set a specific arrangement of tables on the screen, or change their appearance.

Poker trackers are supported by Bwin.Party poker rooms, however not fully and with restrictions. So, since 2019, you cannot save the hand history on a computer. In addition, the use of the HUD was prohibited during the game. And in order to make the accumulated statistics lose all meaning, network players were asked to change their nicknames. Therefore, now Hold’em Manager and Poker Tracker can be used exclusively for analysing your own game.

In terms of cash traffic, Bwin.Party ranks among the largest networks in the world. The game is still played here for US dollars. Thanks to the creation of all conditions for recreational players, the field in the network’s rooms is rather weak. At peak times in the evening across Europe, there are over 3000 simultaneous connections.

The most popular game formats are Hold’em cash tables and fast poker. At micro-stakes, up to 100 tables are gathered at the same time, 10-20 tables can be found at each of the following limits: 25, 50, 100 and 200. There is a little less play at the higher limits. The high roller tables (NL5000) in the Bwin.Party poker rooms are collected quite often.

There are significantly fewer pot-limit Omaha tables. Approximately 5 tables are played simultaneously at each limit up to PLO100. 1-2 tables are collected at higher stakes (up to PLO2.500).

Fast poker can be played at four limits (from NL4 to NL100), and at each limit, on average, from 100 to 150 connections are recorded. Bwin.Party also offers SNG tournaments. This format has the most low-limit games with buy-ins under $ 10. There are also lottery tournaments on the network for 4 people, which allow you to earn money for knocking out an opponent (chosen at random). The maximum prize pool in Spins is $ 1 million.

Bwin.Party also offers a wide variety of multi-table tournaments. Most MTTs are held with buy-ins ranging from $ 5.5 to $ 109. The most expensive tournament is held on Sundays, worth $ 2.600. There are satellites for offline events and free rolls.

The rake at Bwin.Party cash tables is 5%, in tournaments the average commission is 10%, but it tends to decrease with increasing buy-ins. In Spins, the rake at the $ 1 limit is 7%, at the $ 3 and $ 5 limits – 6%, and when participating in lottery tournaments for $ 10 or more, a commission of 5% is paid.

A new loyalty system has been introduced in the Bwin.Party rooms, which allows you to receive cash-back from 20% to 40%. To reach the levels of the loyalty program, you need to collect points (for every dollar of rake, one point is issued) throughout the week. To get the minimum cash-back, you need to score at least 25 points per week. The maximum 40% cash-back is received by players who have generated rake from $ 1200 in a month. To get even more rakeback, please contact our managers.

Bwin Poker does not differ in functionality and capabilities from Party Poker that much. The only difference is in the registration of the client and the valid promotions. Bwin Poker primarily attracts lovers of cash games at low limits (up to NL10). There is also a lot of play at the middle limits, and individual tables are collected at the highest limits (up to $ 5,000). For recreational players, Casual Cash games are of particular interest, where more than one table cannot be opened. Pot-Limit Omaha is also represented in the room, but in terms of traffic this discipline is significantly inferior to Hold’em. Fast poker can be played at 4 limits, with purchases ranging from $ 4 to $ 100.

The tournament grid at Bwin Poker is well developed. Tournament events are divided into three categories based on buy-ins. On Sundays, the most expensive tournament is held at a cost of $ 2.600 and a guarantee of $ 100.000.

PartyPoker was the largest poker room in the world until 2006. Then the business of the company began to decline, but in 2016 the brand again began to restore its former popularity and authority. Since joining the Bwin.Party network, the conditions for playing at Party Poker have become more interesting. Therefore, the attendance of the room gradually began to increase. Now this room is included in the list of the most visited in terms of cache traffic volume.

PartyPoker offers a wide variety of poker disciplines and formats. You can play No Limit Hold’em, Pot Limit Omaha, Stud, Fast Poker, Spins, SNG, MTT. Cash tables start at $ 0.01 / 0.02 and end at $ 200/400. The tournament grid is represented by events with re-buys, bounties, add-ons. There are lottery tournaments, free rolls and satellites. By participating in the loyalty program, you can get a decent rakeback ranging from 20% to 40%.

Why is it profitable to play at Bwin.Party rooms

The Bwin.Party network is distinguished by a large number of recreational players for whom the ideal conditions are created here. Of course, the lack of waiting lists, poker tracker support, and anonymous tables make multi-tabling difficult. However, for the regulars, the rooms of the Bwin.Party network will also benefit from the weak field.

A wide range of disciplines and poker formats can satisfy the needs of any player. High traffic of cash tables at low and medium limits will make it easy to find a game at any time of the day. Thanks to the thoughtful and functional software, the game process becomes as convenient as possible. Also, the poker rooms of the Bwin.Party network are characterised by a relatively low rake, the ability to quickly withdraw funds and a fairly high rakeback with an active game.

Rakeback: up to 60%
Trackers Not Allowed
No Welcome Bonus
Additional Rakeback 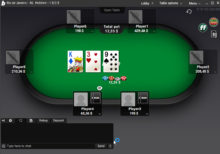 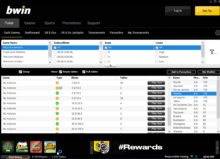