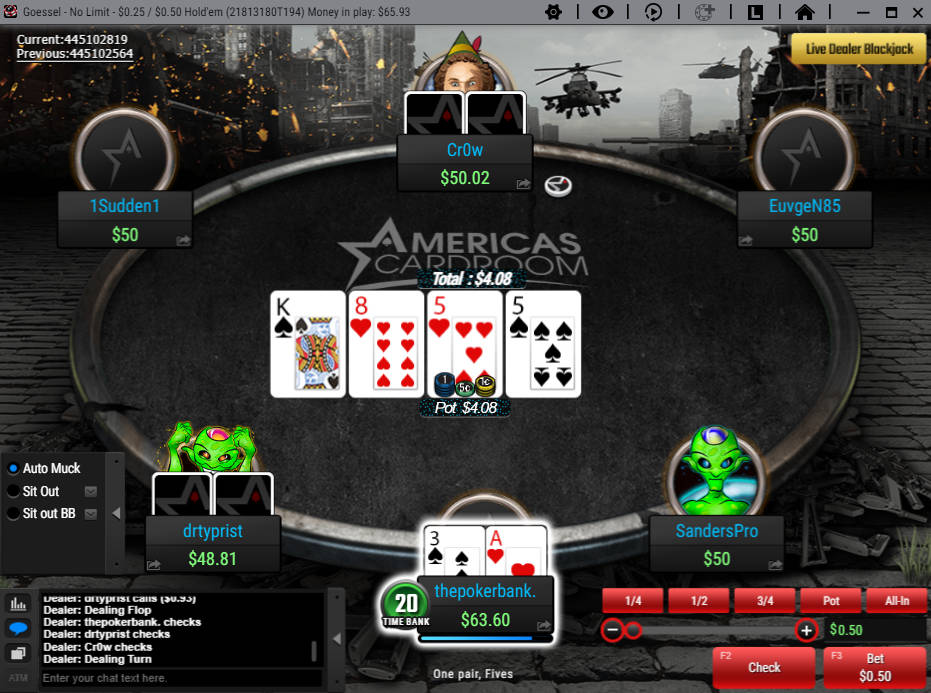 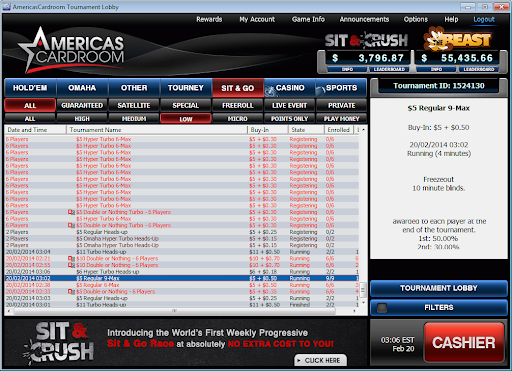 American poker room Americas Cardroom took the leading positions in the WPN network in 2021. At the moment, this room is consistently included in the TOP-10 of the most visited rooms in the world, and among the US operators it even holds the first place. It is noteworthy that the popularity of this poker room is only increasing, not only in America, but also in European countries. This is due to the competent policy of the company, which improves the playing conditions for all users. Among Russian-speaking poker players, Americas Cardroom has gained popularity due to the fact that this room is the largest among those who accept recreational American players. Of course, this fact attracts a large number of European users, as a result of which the lineups are gradually increasing. However, against the background of more popular rooms, ACR still looks very profitable and promising. Americas Cardroom was founded in 2001 and was originally part of the Ongame network. This room was one of the first to receive American players. After the ban on online gambling in the United States in 2006, the poker room Americas Cardroom closed. The operator's return to the market happened in 2011 with the purchase of the Doyles Room player pool by the company. After signing with WPN, ACR has re-launched its services to US players and has become one of the most popular poker rooms in the country.

Let’s start our Americas Cardroom review with software. The room software has been completely updated in 2019. In terms of capabilities and features, Americas Cardroom client can compete successfully with the world’s leading poker rooms. Thanks to the well-thought-out navigation, the user will easily find the section of interest and will quickly be able to start playing at the desired limit and in the required discipline. The design of the room also raises no questions – it is quite laconic, not flashy, but at the same time stylish and modern.

The software developers decided to limit the use of animation and other effects, which caused only positive emotions among users. Indeed, such serious projects as Americas Cardroom should not be replete with banners, advertisements and animations, preventing the player from focusing on the interface. The disadvantages of the software include the inability to view players’ nicknames directly from the lobby. The names of your opponents are revealed only after you sit down at the table and make at least one bet (1BB minimum).

It is not yet possible to download Americas Cardroom to mobile вумшсуы – a version for smartphones and tablets is still under development. However, the browser version of the poker room copes well with its tasks. Only using the browser from the phone will make it possible to play only Jackpot spins and fast poker.

You cannot play poker from a computer through a browser. You must first download the client by clicking on the “Download Now” button, which you will see immediately when you visit the official website through the Americas Cardroom mirror.

At the moment, Americas Cardroom is ranked 8th in the world in terms of Internet traffic. If you do not take reservations into account, then WPN is in the TOP-5 of the most visited networks. On average, 1,100 online players are recorded per day, and at peak times the attendance reaches 3,000 people.

Traffic dropped significantly in May 2019 when the room introduced an inconvenient client from IGSoft. As a result, almost half of the players left the network in search of rooms with a more optimised client. The company began to refine the software, which led to the return of its visitors. Soon, Americas Cardroom surpassed 888Poker and almost caught up with the iPoker network.

The most popular poker format in Americas Cardroom is 6-handed No-Limit Hold’em cash games. The maximum number of players in this format gathers from 12 to 10 am CET. During this period, most connections are recorded from the American continents. The game takes place at the limits from NL2 to NL5K. In addition to 6-max tables, there are also 9-max tables in the cash section, which are less popular.

Americas Cardroom’s exclusive 7-day no rathole game format. In this variant of Hold’em, each player buys 10BB and plays with this stack for a whole week. Fast poker is also present in the considered room, here it is called Blitz Poker. You can play both Hold’em and Omaha at limits up to $ 5/10. Most of the players gather at the limits NL10, NL50 and NL200 (about 100-150 players). It is noteworthy that this cash format is the only one available from a mobile phone, so the line-ups should be very weak.

Another unique format in Americas Cardroom is Bomb Pots. Cash tables of this format are marked with a red core icon. At such tables, a special hand is played 4 times per hour or during the bonus hours: each player pays an additional 2BB (for a 9-max table) or 4BB (for a 6-max table), and trading starts from the flop. Thus, each player participates in the hand from the flop, which creates an additional action, especially since the pot is very large at that moment.

The multi-table tournaments at Americas Cardroom feature regular events with buy-ins ranging from $ 1 to $ 55. More expensive tournaments with a larger prize pool are held on Sundays. So, for $ 1050 you can participate in the $ 100K High Roller PKO. The biggest and most anticipated event of the year is the Cub3d Online Super Series with a guaranteed prize pool of over $ 10 million. As for the most expensive tournament in Americas Cardroom, it is Venom with a buy-in of $ 2,650 and a prize pool of over $ 8 million.

SnG can be played with both Hold’em and Omaha rules. Buy-ins range from 55 cents to 109 dollars. Mostly single-table tournaments of 6-max or 9-max format prevail, but there are also several multi-table SnGs.

There are also spins in Americas Cardroom, this format is called Jackpots. To participate in the most affordable lottery tournament, you will have to pay $ 2 (for comparison, at PokerStars – the minimum is $ 0.25). The maximum multiplication factor is x2,500, which is also much inferior to more eminent competitors. However, this format is supported by a fairly good rakeback (27%), a low commission of 6% and a fairly large chance of catching a x4 multiplier.

In terms of rake, Americas Cardroom does not differ from other top rooms. Cash games are deducted from the rake calculated according to the standard weight contributed scheme, i.e. depending on the investments in the bank by each player. The commission is taken only from those hands that were played postflop.

In Spins, the standard rake of 6% is withdrawn at all limits. Therefore, in terms of commissions, Americas Cardroom will be profitable at low and medium limits. But lottery tournaments with expensive buy-ins will not be so profitable, because many competitors will have a lower commission.

Rakeback in Americas Cardroom is one of the main advantages of the poker room. From the very beginning of the game, users can expect a fixed percentage of rake return – 27%. By participating in the incentive system, this percentage is quite realistic to increase to 65%. Fixed rakeback will be beneficial for those who rarely play and play few hands during the month. For regulars, the second option is better.

The loyalty program in Americas Cardroom is called Elite Benefits, and it is presented with a military theme (with titles, battle points, awards). Points are awarded for the generated rake and then exchanged for real money. For every dollar of rake, the player receives 5.5 points. This number is multiplied by an individual coefficient, the size of which depends on the level occupied. After crediting battle points, they can be exchanged for cash in your personal account.

The Americas Cardroom VIP Program has 6 levels, 4 of which are reached within a month and 2 within a year. To reach the maximum 5-star General level, you need to generate a rake of $ 181,819 per year. In this case, the player’s rakeback will be 57-65%. To maintain the achieved level, it is necessary to score 2 times less points in the next reporting period.

You can get extra rakeback at Americas Cardroom by participating in races. There are leaderboards for both cash players and CIS players. Race winners will be rewarded with cash prizes ranging from $ 50 to $ 500, as well as tickets to the Sunday tournament.

Many negative reviews about Americas Cardroom are related to the fact that this room does not allow withdrawing money using the popular payment systems Skrill and Neteller, as well as to bank cards. However, the advantage of this room is the ability to perform financial transactions in cryptocurrency, with several coins.

Americas Cardroom undoubtedly deserves the attention of pro players in the first place. For them, almost ideal conditions have been created here for modern realities. Let’s note the main advantages of the American poker room:

Among the shortcomings of Americas Cardroom, players mention the inconvenient peak time for Russian-speaking players, which is at night and in the morning in Europe. Fans of playing on mobile devices will not like the lack of a full-fledged mobile client. Also, a significant disadvantage will be the inability to withdraw money to popular payment systems. However, all these disadvantages are offset by a very weak field and high rakeback.

Before signing up for Americas Cardroom, please contact our managers. We will offer you more favourable conditions for registration and playing – increased rakeback, additional bonuses. We also provide professional support to all our clients.