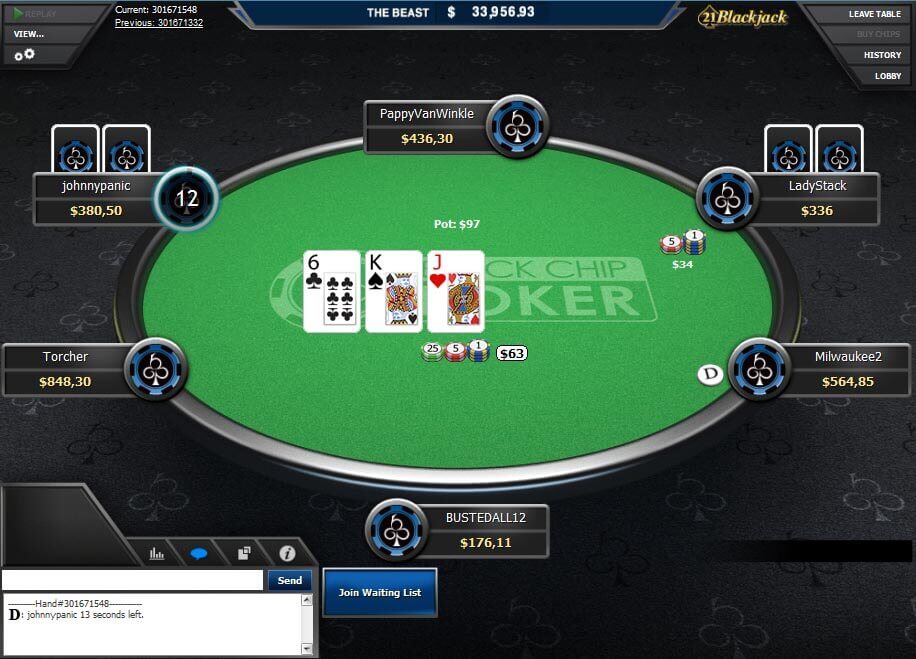 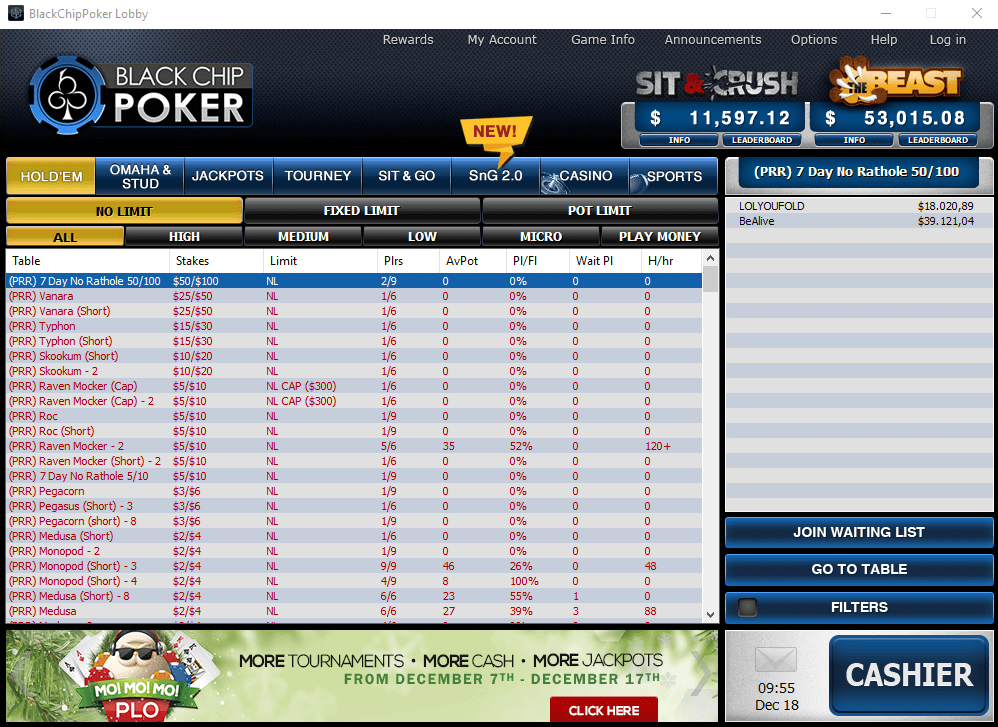 Black Chip Poker is a well-known American poker room, part of the WPN network, which is distinguished by favourable conditions for regular players. This network has united the largest pool of American players, and in terms of cash traffic it is one of the five most visited networks in the world. The poker room Black Chip Poker was founded in 2001 and legally provides its services under a license from Curacao. Compared to the other skin on the network, Americas Cardroom, Black Chip Poker is not that popular among Russian players. However, in terms of their functionality and capabilities, these rooms are almost identical. Black Chip Poker gained popularity not only due to the weak field, mainly consisting of amateurs from the USA, but also due to the profitable loyalty system, according to which you can receive a fixed rakeback of 27% from the very start or reach a maximum rakeback of 65%. There is a wide range of formats and types of poker, but most of the players gather at cash tables according to the rules of Hold'em and Omaha at limits up to NL5K.

Let’s start our Black Chip Poker review with its software, which was updated in May 2019. Now the room is used by a client from IGSoft, which at first turned out to be too raw and unfinished. As a result, players began to leave the room massively, which led to a decrease in traffic by almost half. When the software was refined, the attendance returned to the previous indicators. At the moment, the client works stably, quickly and without any freezes.

The lobby is decorated in a minimalistic, but quite interesting style – nothing superfluous, but everything is very comfortable and practical. With the help of filters, you can quickly find games of interest according to the specified parameters. It is possible to make notes on opponents, display stacks in dollars or blinds, change the standard size of bets. Of the unique features of the Black Chip Poker client, one can single out a special lottery, which is available after leaving the table – the entire stack can be put on red or black, and either doubled or lost.

The disadvantages of Black Chip Poker software include the inability to view the nicknames of players from the lobby. To make the names of your opponents visible, you need to sit at the table and post the big blind. The poker room does not allow the use of auto-landing software and various prompting programs. You can only use popular trackers – Hold’em Manager, Poker Tracker and Hand2Note.

To play poker on a smartphone or tablet, you need to go to the official Black Chip Poker website from a mobile browser, because The poker room has not yet released a separate application. In the browser version, only spins and fast poker are available. However, the developers assure that a mobile client will be released soon.

In terms of cash traffic, Black Chip Poker ranks fifth among all poker rooms in the world, excluding reservations. Peak traffic occurs late at night and in the morning Moscow time. During this period, the number of online connections can reach 3,000. Average daily attendance is about 1,100 people. If you want to play against recreational American players, then schedule your session from 1 to 7 a.m. CET. At this time, the room is visited by the least number of European regulars.

The most popular at Black Chip Poker are the 6-max Hold’em cash tables. The game is available around the clock, and at all limits – from NL2 to NL5K. 9-max tables are also presented in the room, but they are less popular – there are up to 30 tables.

Omaha has an average of 40 tables played in 6-handed and 9-handed formats, both in the classic variation and in the hi-lo. The maximum limits are up to $ 200/400. Black Chip Poker features fast-paced Hold’em and Omaha poker with up to 200 players in total. The most popular limits are NL10, NL50 and NL200.

One of the few steps taken by the room towards recreational players is the emergence of the Bomb Pots format. At any time (up to 4 times per hour), a special hand starts, in which all players place antes (2BB or 4BB for 9-max and 6-max tables, respectively). Trading begins immediately after the first three cards of the flop are revealed. Tables of this format are marked with a red bomb icon.

The daily tournament grid of Black Chip Poker is represented by about 100 events, most of which will cost between $ 1.1 and $ 55. The largest and most profitable tournaments are held at night and in the morning in Moscow. Most tournaments have late registration with infinite reentry and not a fast structure, which is great for regulars. The biggest weekly event is the 200K GTD 9max for $ 1,050. The largest Super Series raises a prize pool of over $ 10 million. Black Chip Poker also arranges satellites for live events, but due to the coronavirus, offline tournaments have been postponed indefinitely.

SnG tournaments are represented by buy-ins from $ 0.55 to $ 108, mainly in turbo and hyper-turbo format at 6-max and 9-max tables. You can participate in lottery SnGs for 2-50 dollars, the maximum prize in them is 1 million dollars.

The rake at the cash tables at all limits in Black Chip Poker is standard and amounts to 5%. Thus, the commission at low limits will be profitable compared to some other rooms, but at high limits it may be lower than that of competitors. The commission is charged in proportion to the shares invested in the bank. The cap depends on the limit and the number of players in the hand. For example, at stakes up to $ 2/4, the rake is capped at 50 cents if there are only two people in the hand. The commission is not charged if the hand ends pre-flop.

6% rake is deducted from lottery tournaments. In other tournaments, the poker room commission can vary from 2% to 10%.

Rakeback at Black Chip Poker is one of the most profitable at the moment, and it is beneficial primarily for regulars who are able to generate a large rake. After registering with Black Chip Poker, you can choose either a fixed rakeback of 27%, or rakeback depending on your current VIP status and reaching 65%. The loyalty system in the room is called Elite Benefits. Thus, amateurs who rarely play and generate a small rake will benefit from the first option. And grinders who ride a lot and often will be able to return an increased percentage by choosing the second option.

The loyalty system is divided into six levels, two of which are valid for a year, and four for a month. For every dollar of the generated rake, 5.5 points are charged. These points are multiplied by a coefficient, the size of which depends on the achieved VIP level. As a result, Player Points get to the account, which can be exchanged for real money at the box office.

To reach the maximum level of the incentive program, Icon, you need to generate $ 181,819 of rake per year. In this case, you will receive rakeback ranging from 57% to 65%. To maintain the current level, in the next reporting period, it is enough to collect half of the required rake points. It is also possible to win additional money when you reach new levels (from 10 to 200 dollars).

Every week there are two races, participating in which you can get additional rakeback. In The Beast Cash Race, prizes are split among the first 1,600 players. In the SnG race, the 400 players who have generated the most rake will get into the prize zone. Depending on the place occupied, players receive a fixed amount – from $ 50 to $ 500 and a ticket to the Sunday tournament. To participate in leaderboards, you do not need to register anywhere – you automatically take part in them. Part of the rake (about 20%) goes to the formation of the prize fund.

Unfortunately, Black Chip Poker does not support the popular payment systems WebMoney, Skrill and Neteller, which will be a significant disadvantage for Russian-speaking players. Among electronic systems, only ecoPayz is available. With the help of bank cards, you can only deposit the account, you will not be able to withdraw money to the card.

But the main trump card of the Black Chip Poker cashier is the ability to perform financial transactions using many cryptocurrencies. Withdrawal of funds takes no more than three days, but most often the money is credited within 24 hours. You can make no more than one cash-out request per day, and no more than five per week.

The American poker room Black Chip Poker will be of interest primarily to professional poker players, although there are good conditions for amateurs too. Regular players will appreciate the ability to use trackers, multi-tabling support, high rakeback, and a weak field. There is a cash game at all limits and at any time, the tournament grid is also quite large.

So, let’s look at the main advantages due to which you should download Black Chip Poker:

The main drawback of the room is that there is no mobile client that could attract even more recreational players. Also, the room is gradually attracting more and more grinders, strengthening the lineups. The inability to view the nicknames of players from the lobby can also be attributed to disadvantages.

If you want to get additional bonuses when registering at Black Chip Poker and play on the most favourable terms, contact our managers.